Posted at 09:32h in #REALwomenmove by Beth O'Loughlin 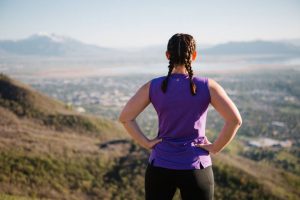 When I was 26 I felt like my life was falling apart. Only six weeks after I gave birth to my sweet daughter, which was a difficult pregnancy and delivery, my mother passed away unexpectedly from an aneurism. It was surreal. She was completely fine and healthy. When I got the call, I was in such shock that I lost the ability to function. I felt like my heart was breaking. The pain was physical, and it left me in a really dark place for a long time. I felt so completely and utterly alone, since I was away from my family. If it weren’t for my daughter and my love for her, I don’t know if I would’ve survived the heartbreak.

Almost immediately after my mother died, I started to get sick. Really sick. It started with frequent and unrelenting headaches and quickly escalated to constant nausea and vomiting, heart palpitations, tremors, rapid weight loss, chest pain, and extreme weakness. For months my health deteriorated. Even the 34 times to my doctor and the 16 times to the emergency room delivered no diagnosis and no result. My unit commander was worried about me and regularly sent me to the base clinic, but it wasn’t until after six months of worsening symptoms and through the skill of my new doctor that I finally got an answer. I was dying of an autoimmune disease that was viciously attacking my thyroid. Under usual circumstances, it wouldn’t have been so bad. However, since I had gone untreated for so long, I had to be emergency rushed to the closest hospital that could treat me, which was four hours away. Luckily, things turned out for the best and I am still here. At that time though, it was terrifying and the treatment was a long (and still is a long) journey.

Throughout all this, I was in a hostile environment within my personal life. I was criticized and demeaned so constantly about my weight, my appearance, and pretty much everything about me, that I developed exercise bulimia. I wasn’t ever really overweight, but through this abatement the way I viewed myself became distorted. I counted every calorie I ate, and I made sure to exercise at least twice that daily. If, at the end of the day, I had an apple or a snack, I would jump on the treadmill or the bike and work off those extra calories before I went to bed. At first I thought I was just being healthy, but I was working myself to illness.

I placed all my self-worth on my appearance and how I thought others viewed me. This is a very unhealthy way to think, and I suffered physically, mentally, and emotionally from it to the point where I hated myself. I truly believed I was being punished for being a terrible person. I felt like I deserved all this misery. My self esteem through those years deteriorated to the point where I felt worthless, disgusting, and unlovable. I didn’t even think I deserved to be loved.

In light of all the pain and self-loathing I felt, I got through it. I didn’t just survive these trials, I overcame them. I came out of this darkness stronger, smarter, and better than I was before. And I did this with a very powerful thing: hope.

As a child, I was so full of hope. My biggest and most significant hopes were to finish college, get a doctorate, marry an amazing man, have a family, serve my country, run marathons, be an athlete, and make a positive difference. During those aforementioned dark times however, my hope was misguidedly placed in finding happiness by being skinny and by changing myself to please everyone around me. This led me to become very depressed and very ill (on top of already fighting a disease).

It was during these hardest times that I realized how unhappy I was and I wanted to make a change. Through the help and support of my true friends, my father, my brothers, and my church, my hope evolved from being on temporary and shaky premises to being placed on a firm foundation. Instead of hoping that I could please people around me by altering my appearance, I started hoping to find someone who would love me no matter what I looked like and no matter what the situation. This further fed my hope to change from me hoping to please everyone to me hoping to be happy with myself.

This hope allowed me to change things bit by bit in my life. Those hopes I had as a child? I was able to accomplish them. Through this hope, I was able to get out of a bad situation and find the man of my dreams. We were married last year and he is the source of so much happiness in my life. I have a sweet daughter, and my hope for her grows each day that she will love herself and be happy.  I still have hope that, in light of my medical issues, my husband and I will be able to have another child.

I always was such a tomboy when I was young. Granted, I still am to a degree, but this part of my personality was the basis of my hope to one day serve in the armed forces. At the age of 23 I commissioned into the Air Force. Although parts of my military service were difficult, I completed my commitment and honorably served my country. I hope that I made a positive difference in the world through my service.

What about my childhood hope to earn my doctorate? Well, I had already earned my bachelors degree before I commissioned in the Air Force. Through that dark time in my life I didn’t have the confidence in myself to think I could ever achieve anything further. But with newfound hope in my own academic abilities I am starting toward that goal. This fall, I start work toward my PhD in Biomedical Science. I hope to be a medical researcher and to make contributions toward better treatment options for autoimmune disease.

My hope to be healthy helped me stop my unhealthy relationship with food and exercise. Instead of counting calories, I work on eating a well-balanced diet. Instead of exercising to lose weight, I now exercise because I love being active! This now healthy passion for fitness led me to hope again that I would one day run a marathon. Three years after I started receiving treatment for my autoimmune disease, I was healthy enough to do just that and I ran the Big Sur Marathon! It was much harder than I anticipated. There were times during that race where I wasn’t sure if I could finish. But, I hoped that I could do it, and I hoped that I would survive the distance. And I did just that! To this day, that finisher medal is one of my most prized possessions for what it represents.

After running consistently (and healthily) for a number of years, I realized that I am an athlete! I’ve competed and completed over 50 races. I’ve hiked in 15 states and two countries. I’ve overcome my insecurity about cycling and my fear of swimming. I’ve tried new things like paddle boarding, kayaking, skydiving, shooting, archery, skiing, rock climbing, yoga, weight lifting, and even dance. I’ve done all this because I hoped that one day I could be an athlete, and now I can say that I am.

Hope is a trust that things will turn out for the best. I will continue to hope, to look toward a future that is bright, and is, hopefully, full of more love, more passion, more running, and more skirts!