Posted at 09:27h in #REALwomenmove by Beth O'Loughlin 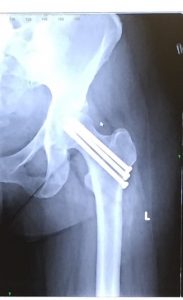 Ithought it would be easy to pick a word. Just one word, something that I felt described me and how I felt about things lately. I wish I could say it was a word that seemed more honorable, generous or commendable. But my word was about me and how I’d felt about my life lately. There are so many words to chose from, but in the end I chose “Progress.” It took me a lot of thinking to come up with this word. Then after I chose it, I realized it was something that should have come to mind far easier, since it is tattooed on my body. If it was three words it would have been “Relentless Forward Progress.”

The tattoo on my leg was done shortly after I finished my first 100 mile trail race. It was the title of a book that inspired and guided me along the way to achieving my goal. It became a mantra to me, to remind me that every step you take in the right direction is making forward progress.  And sometimes you just have to be relentless about it.

I wound up with pretty serious stress fracture in my femoral neck late last year. It resulted in surgery. I had three screws, each three inches in length inserted in my femur to brace the fracture.

I had no idea how hard it would be to sit around in my recliner all day and use a walker just to get the the bathroom. I needed help to do just about everything.  It was very humbling and honestly quite depressing. It was so difficult to hear the amazing things my friends were doing while I sat on my butt all day reading books, watching Netflix, or throwing the ball for my dogs. (Ok, I did enjoy doing all of those things, but I didn’t like the being injured part.) I was happy for their achievements, but felt sorry for myself.  We cancelled races and vacations because I could not even get on an airplane, let alone run the race I was signed up for.

I worked hard at my physical therapy and a few months later I was able to run again. I am now running outdoors and doing a few races now and then. I can’t do the insane ultra distances I was doing before my injury, but one day I’ll get back there.  But for now I’ve altered my plans and decided to take on a project of running every street in my town this summer. It’s been fun to give myself new priorities and new goals, and I’m enjoying the process it is taking to get there. I’ve stopped comparing myself to others and counting mileage. I’m just being me, doing my own thing and enjoying the process. I’m happy to be healthy and getting stronger.

One day in the future, you will find me at the intersection of crazy and stupid. I’ll be doing some insane distance or event that will make my family and friends shake their heads. But until then, I know that the things that happen in my life are for the greater good and I’ll embrace the change and continue making Relentless Forward Progress.