17 Jun #WhyIMove? – because I deserved so much more by Bonnie W

Posted at 11:41h in #REALwomenmove by Beth O'Loughlin 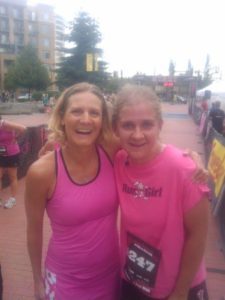 #WhyIMove? – Because I deserved so much more by Bonnie W

Why do I move?

It is best summed up.

This whole thing really started as my attempt to lose weight. Honestly, I was going to lose the weight, that was the only goal. Then I decided that it might be a good side goal to run a 5K. My trainer agreed that it would be great motivation.

I felt slow, fat, out of shape and I felt like I did not belong. That was the worst I would say 45 minutes of my life.

And I said I would never do that again.

I needed help to realize how inside my head I was. All I saw was the weak and ugly parts of me at that point. I also was the queen of self-sabotage when it came to making sure that’s all I would ever see and I tried to make people see that too. I was lucky enough to have a trainer in my life who saw things for what they had been for and put up with a whole ton of self-sabotage from me to help me break through. I have said this before, I owe Zac George a lot because he saw things in me before I saw them and dove in head first to help me find them.

He convinced me to try it a second time and it was the race that changed my life.

I ended up doing the original Skirt Sports Skirt Chaser Race. (I warned you! I am an Original Skirt Sports girl) The race had a totally different atmosphere. It was more like a party then a race and I had a blast. My trainer and I had talked several times before that race and one of the things he had said to me was when those feelings of anxiety hit or when those “not enough” feelings hit I needed to just focus on one thing.

One step at a time.

It turned into a game of making the step in front of me better than the last. In the last mile of that race I ended up running right next to Nicole Deboom, the founder of Skirt Sports and we talked and she was very encouraging. She told me she was proud of me being out there and challenged me to take the last .10 of a mile at a sprint.

Slowly but steadily I built up the millage, I did a 10K a few months later then felt so accomplished I was going to do a half marathon. I only wanted to do one and done.

31 half marathons later at this point?

But it took a lot of work. I had a lot of baggage that I did not realize I was carrying around and I was unhappy. And the bigger problem I did not think I deserved to be happy. But running taught me to address things using that one step at a time approach and I even think now it is still a work in progress.

Running also taught me to take time for myself. Through my dad’s illness, my battle to finish school, the trials of being a freelancer, still trying to address my baggage, and everything else running was the one thing that kept me on track. It kept me focused and motivated. I always seemed to be chasing the next medal. But that motivation spilled into my personal and professional life as well.

I had the honor of several ambassadorships and opportunities to volunteer for races and share my story. Those had been fun for a time but so much work and it took away from my motivation after awhile. It has gotten better.

In the last year or so my reasons have evolved.

I think the best way to say it is to share a story from last year when I was pacing at the Pacific NW Half Marathon. I was pacing the 3:00 half group (the party sweeps snails as I like to say.) I passed a group of ladies at mile four and one of them peeled off to join me. She did not think she could stay 3:00 the whole time but wanted to try. Here is the rest of the story.

I told Kari to walk a little more and save her energy for the last push at the end. She was a little worried about the 5K’ers coming in so fast around us, but I told her just focus on what we are working on and she will be fine. She was almost in tears at this point. She was hurting but wanted her daughter to see her finish strong. I think we made the right call in the long run because just at the last quarter mile she felt like she was ready so I told her to go and I was screaming for dear life. She finished in 2:59. We both cried a the finish line.

Being able to inspire someone like that helped me remember why I run. It’s not for the medals, its to continue to light the flame, sort to speak. Its to be able to say “Hey if, I can do it you can.”

And it is about reminding myself of how far I have come.

(Follow Bonnie and her running adventures on her blog: Zombie Running Princess.)