Posted at 11:52h in #REALwomenmove by Beth O'Loughlin 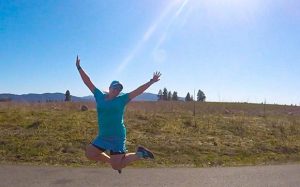 In my head, I’m a new runner. In reality though? I’ve been running for more than four years. So why the discrepancy? Because for most of that time, I never considered myself a “real runner”. To be honest…sometimes I still don’t! I came across a photo the other day, a photo I took after my very first day doing a C25K program, and it got me reminiscing about this running journey I’ve been on.

Like so many women, I began running for weight loss. Our third child had recently been born so we decided to get some family photos done. When I saw the finished photos, I cried. I had stopped taking care of myself, and I knew that had to change. So I decided to start running.

How hard could it be? I had an old treadmill that I always intended to use, so all I needed was a pair of running shoes. I headed over to a big box store and found a pair of Nike running shoes on clearance. Perfect! They’re Nike, they must be good right?! So I headed home, laced up, and started running. It was awful. I thought my knees were broken! I literally couldn’t walk for days. Clearly, running wasn’t for me. I gave up.

It was, however, a catalyst to improving my health. I changed my eating habits and started including regular exercise into my days. But every time I saw someone running, I wished it was me. It took a long time, but I decided to give it another try. This time, I did my research. I got fitted for running shoes and got a gym membership. I was set!

I went to the gym, hopped on the treadmill, an immediately felt lost! There were so many buttons! Then I noticed a set of three buttons…”walk”, “jog”, and “run”. Well, obviously I wanted to run, so that’s the button I pushed. Hardest 60 seconds ever. But I kept at it. It was hard, it was painful, and I wasn’t sure how I was going to ever be able to go longer! After a couple of weeks of this, I realized that the “run” button set the treadmill at 6mph. That’s a 10 minute mile pace! There’s no way an overweight couch potato was going to be able to sustain that! I realized that if I ran slower during the run intervals, it was not only more manageable…but I didn’t feel like I was going to die!

Seconds turned into minutes, Minutes turned into miles, and the next thing I knew…I could run for 30 minutes straight! It was such an amazing feeling and I couldn’t wait to see what I could do next!

And then I found out I was pregnant.

I promised myself I’d keep running. (My doctor even encouraged me!) but then we discovered I had a large fibroid tumor growing on my uterus. The rapid growth of it, plus all the normal pregnancy changes, caused a lot of discomfort. Running would have to wait. This fibroid ended up causing me to go into labor at 21 weeks, resulting in the early birth of our baby boy. He was too little to live long, but we were blessed to get to spend a few hours with him.

I’m sure many of you out there can imagine how hard it was. The loss of a child, no matter the age, is difficult. Oddly enough, running became my way of working through the grief. As soon as I got the go ahead from my doctor, I started walking. Then after a while, I started running. Before long, those 30 minutes of running in the quiet of the early morning became my solace. My time to think and to pray.

And then I found out I was pregnant.

Finding out was pregnant again was crazy for so many different reasons. There’s a whole lot of story to be shared, but for now I’ll keep it brief. I stopped running, had a crazy pregnancy filled with complications, but in the end our baby girl was born healthy.

Recovery was a process, but I began going on walks as soon as I was able.

As I became more able, I started running again. It was challenging with a baby, but I knew I needed to invest that time into my health. I worked my way through the C25K program again, then got to the point where I was wondering “what next?”

Through all of this, I didn’t ever tell people I was running. A few people knew, but not many. Then one day, I stopped by a friends house, and she had just gotten home from running. So I told her how I had just finished up with my C25K…which somehow led to me saying I’d run a 10k with her!

Well, there was nothing left to do but train. When race day came, I was worried. I knew I was slow. I knew I didn’t look like a typical runner…and I was half convinced they wouldn’t let me run. Once I got there though, those feelings went away. These were just normal people! All different ages and sizes and paces.

Running is always a journey. There’s always new goals and new accomplishments. It’s interesting to look back at what brought me to that one spot, that one thing that made consider myself a runner. To look back and see how my motivation for running has evolved. It started out as a way to lose weight, and I saw it as a punishment.  Now?  Now it’s something I do because I love it.  It’s a way to relax and unwind, a way to recharge and prepare for the day. I’ve come far both mentally and physically, plus I’ve accomplished some great goals along the way.  It makes me wonder where I’ll be four years from now?